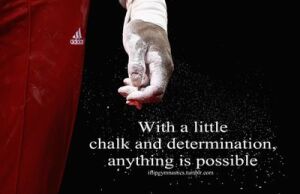 Timothy E. Bilicic, 51, a proud Geneva Viking, died unexpectedly at home on Thursday, April 21st  due to long-term medical complications.  Born on June 7th, 1970, Tim was the eldest child of Ed and Virginia Bilicic.  He graduated from Geneva High School in 1988 and had been a Painesville resident for the past decade.

Tim’s life passion was gymnastics—whether it be as an active and skilled participant or, in later years, a caring and dedicated coach.  He joined the Geneva Vikings Gymnastic team at age six and competed with the team for twelve years.  A talented gymnast on both the trampoline and the double mini-tramp, Tim took great pride entertaining others with his skills.  While still in high school, Tim was able to jump so high off the trampoline in the old Spencer School that he could grab the rafters and hang there—much to the delight of the crowd.

He trained hard and possessed an outstanding work ethic which served him well.  In 1989 Tim qualified for the USA gymnastics team and competed with them in many locations around the world.  In 1990, as a member of Team USA, his life-long dream was realized when he won a gold medal at the World Games in Birmingham, Alabama on the double-mini trampoline.

Tim continued to train for competitions well into his twenties.  He managed multiple fast-food restaurants, always holding down at least two jobs, so he could train, and later coach aspiring gymnasts.  For the past ten years, Tim coached at All Around Gymnastics in Mentor.  He loved teaching kids and poured his life into them as a coach.  He was very proud of his many students for the lofty goals they reached, but more importantly, for the quality persons they became.

In addition to his exploits on the trampoline, Tim volunteered for several years at Mont Chalet Aerial Free-Style Training Center in Chesterland.  Using his gymnastic skills, he assisted free-style skiers in their quest to perfect flips and other aerial maneuvers.

Tim loved his many nieces and nephews.  He thoroughly enjoyed playing with them whether that be bouncing on the trampoline or rolling around on the floor acting like a monkey reveling in their laughter.  He never lost touch with the young kid in his heart—a life lesson for all of us to remember.

He was preceded in death by his mother, Virginia “Ginny” Bilicic and his Grandparents Bill and Alberta Jamison and George and Anna Bilicic.

Tim is survived by his father, Ed Bilicic (Geneva), sisters Stacey (Ashtabula) and Melissa (San Francisco), and brothers Jeff (Sarah) of Perry and Jonathon (Heather) of Chardon.  He will also be dearly missed by his nephews Nicholas, Mason, Aiden, Gavin, Spencer, and Elliott and nieces Alexandra, Arianna, Grace, and Eva.  Tim is also survived by numerous aunts, uncles, and cousins.

Calling hours will be held Thursday, April 28th from 5-7 at the Fleming & Billman Funeral Home, 323 S. Broadway, Geneva.  Services will be held immediately after the completion of calling hours.  Per his wishes, Tim will be interred in his family plot in Evergreen Cemetery, Geneva, at 10:00 AM Friday.

To send flowers to the family or plant a tree in memory of Timothy Edward Bilicic, please visit our floral store.